As well as battling fiercely for the smartphone market, Microsoft and Apple also continue to scrap over desktop computer customers.

Windows have recently announced the launch of their new Surface Studio, but what does this mean for Apple and the iMac? If you are on the lookout for a new professional desktop computer we’ve looked at the key differentiating features to help you make your choice!

With most features the two devices are very similar;

Both devices are aimed at the professional, specifically the creative professional with starting prices of £2400 for the Surface Studio and £1749 for the Apple iMac. For once Apple seems to be the device with better value… or does it…

Apple once dominated the creative professional market, designers in the industry leaned towards Apple as the ‘go-to’ device due to its styling/good looks and how seamlessly the integrated hardware worked and ran alongside creative tools such as the Adobe Creative Cloud Suite. However, Microsoft has come steaming in with what could be a device we see take over the creative industry as the ‘go-to’ tool!

The key differentiating features are in the design quirks… here we think the Surface Studio comes out on top, for sheer innovation.

The Surface Studio screen pivots down with a zero-gravity hinge to become a canvas, essentially a touchscreen drafting table. The way this desktop morphs into a giant tablet, perfect for supporting those working creatively, really makes the Surface Studio stand out as new and different. Then there’s the ‘Surface Dial‘, this is the real game-changer, an addition to the Surface Studio that you can place directly on the screen and interact with supported apps, Adobe Photoshop, for example, is fully compatible enabling you to change colours, pick new brushes, create gradients, zoom and much much more. It’s early days for the dial with not many apps supporting it, but we think it won’t be long before the Surface Dial is taken on board by all developers creating tools for the creative industry, keep an eye on this one!

The Surface Studio also works seamlessly with the Surface Pen which can be used on all other products within the Windows surface family. You may also appreciate the connection ports being on the rear of the base, giving you a slightly tidier looking desk space.

With a creator update to Windows 10 announced, Microsoft is upping their game to compete with the iMac and MacBook as the creative device of choice.

However the iMac does have a few little quirks in its favour, the additional two thunderbolt ports give you an additional connection option, this could be used for an additional screen and the slim base does take up the least space on your desk.

The two computers also offer different options in terms of graphics handling. Here this is down to personal preference.

If you are happy with the traditional functionality of the iMac then Apple wins hands down with its more competitive entry-level price point. However, Microsoft is changing the game with their screen design, its innovative, slick, powerful and good to look at, watch out Apple, Microsoft is hot on your tail!

For more detail on the pros & cons of each, this article from pocket-lint is a good place to start. 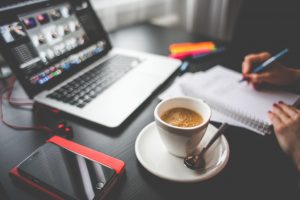